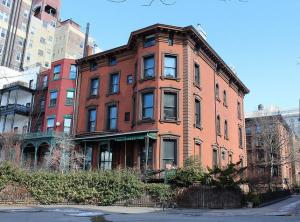 In Chapter One we follow the Four Doctors to Adam Rauch’s brownstone on Grace Court at the Promenade in Brooklyn Heights. It provides residents and visitors with a breathtaking view of the Manhattan skyline, arguably one of the most beautiful places on the planet. Rauch and his friends’ parents bought the homes back in the day, when they sold for a million dollars. Now this apartment is listed at $1.8 million dollars. Just the one apartment.

How times change. We remember the  Patty Duke Show of the Sixties which made the Heights famous. In the Seventies, the horror flick The Sentinel was filmed at 10 Montague Terrace (see photo). That’s when they really started upping the ante in this real estate area. To add insult to injury, this is listed as a one-bedroom apartment.

The narrative speaks of how the four friends would hang out under the Brooklyn Bridge at night, admiring the view and dreaming of their future success. It was an autobiographical touch by JRD, who spent his own childhood fantasizing about his own slice of the Big Apple while gazing at the Statue of Liberty, the World Trade Center, the Empire State Building, and dozens of other landmarks.

“You couldn’t ask for a more inspirational sight,” reminisces the author. “You could hang out under the Bridge or on the Promenade all night and come back the next night, and the next and the next. It was something you can never get tired of. Whenever I go back for a reunion with my old buddies, at the end of the evening, we’re right back where it all started.”

Transplant‘s Dr. Adam Rauch and the Mad Doctors may not be quite that mad. The rise in numbers of amputees around the world has resulted in tremendous breakthroughs in bionic limb research. Here’s an article about research sponsored by DARPA (Defense Advanced Research Products Agency) in The Register discussing the progress of Staff Sgt. Glenn Lehman:   http://www.theregister.co.uk/2013/06/01/darpa_bionic_arm/

We also have the BBC’s account of  Cpl. Andrew Garthwaite having his nervous system rewired to control his bionic hand:   http://www.bbc.co.uk/newsround/25331063

Although these procedures are highly expensive and still in the developmental stage, the day is coming soon when Mad Doctors won’t be relying on a Dr. Cyclops to help give patients a new lease on life.